Sunday 3rd April 2022 saw thousands of runners lace up for the challenge of the 26.2 mile distance that coursed through the streets of iconic Greater Manchester. Not only that, but we also welcomed an incredible team of 1,000 volunteers and over 100,000 supporters who lined the streets to cheer on the runners.

The elite field was the strongest to date, as the Therme Manchester Marathon played host to the Commonwealth Games qualifiers, European Athletics Championship trials and the European 50K Championship qualifiers. With over 150 elite athletes signed up to compete for the coveted ‘top 3’ finisher positions, the Therme Manchester Marathon welcomed the best of British athletes to its course. 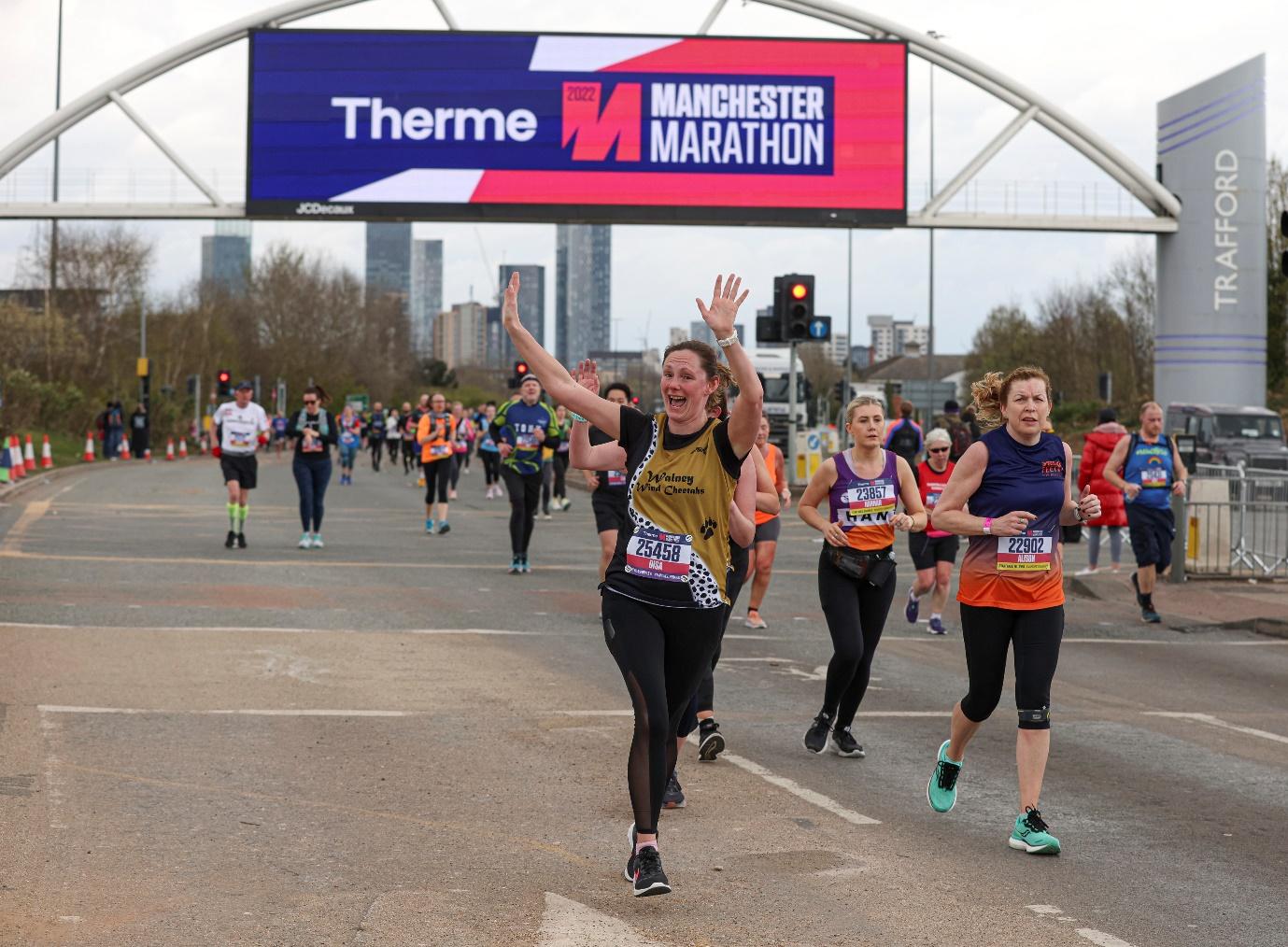 Therme were proud to sponsor the Manchester Marathon for the second year running showing that, even before Therme Manchester is built, Therme Group is committed to supporting the health and wellbeing of the Manchester community.

Competition was tight for the position of first finisher with Jonny Mellor taking first place with a time of 2:10:46. He was closely followed by Ross Millington and Kevin Seaward with respective times of 2:11:38 and 2:11:54. Joining her compatriots as first female finisher was Beck Briggs, who finished with a record-breaking time of 2:29:04, closely followed by Naomi Mitchell (2:30:54) and Georgina Schwiening (2:31:37). 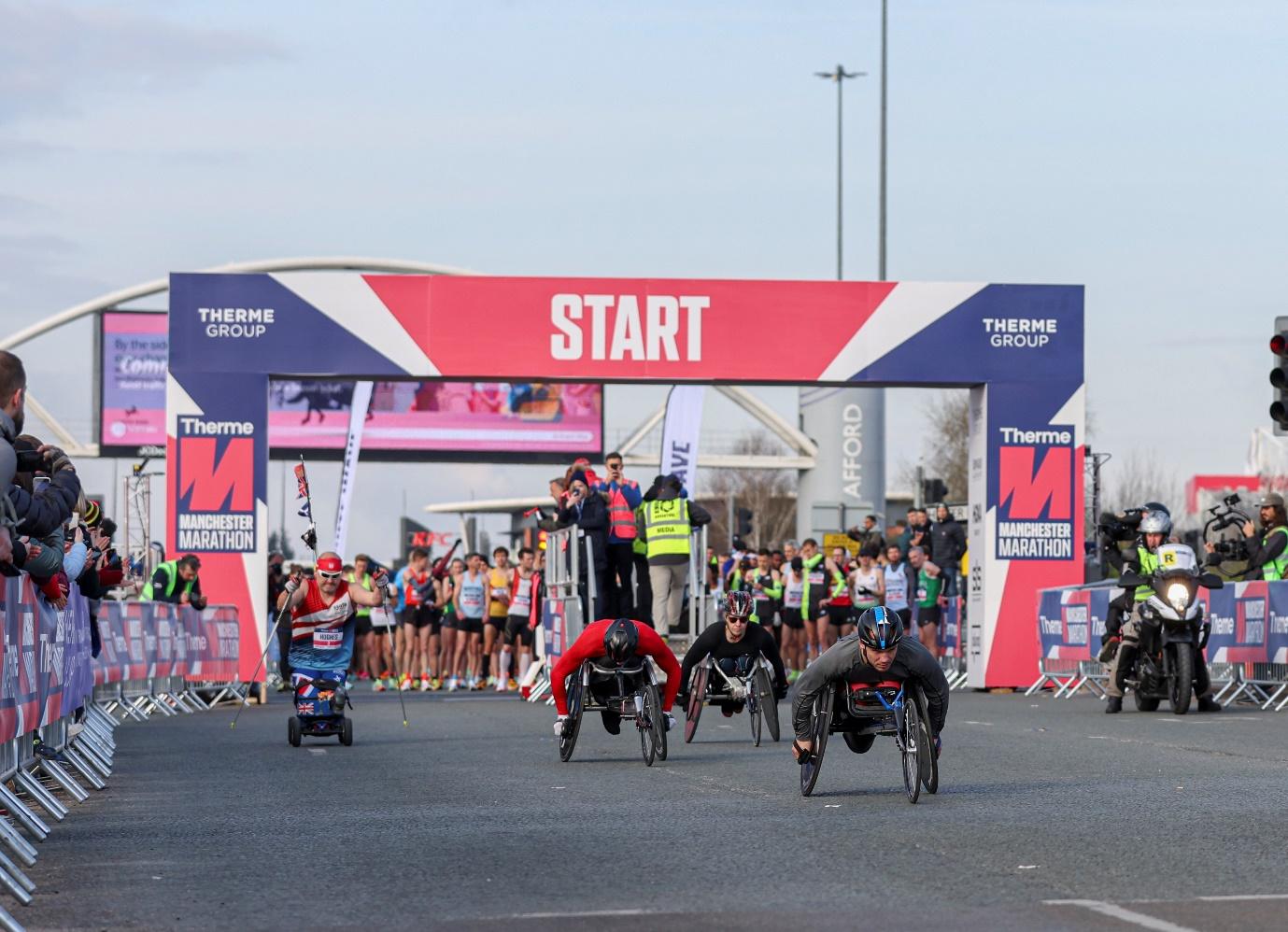 The wheelchair elites setting off first on Sunday morning.

After completing their run participants were invited to stretch off and relax in the Therme Recovery Zone. With stretching mats, foams rollers and a Therme-inspired natural setting, the hugely popular zone supported the health and wellbeing of participants, giving them a chance to relax and recover from their run. 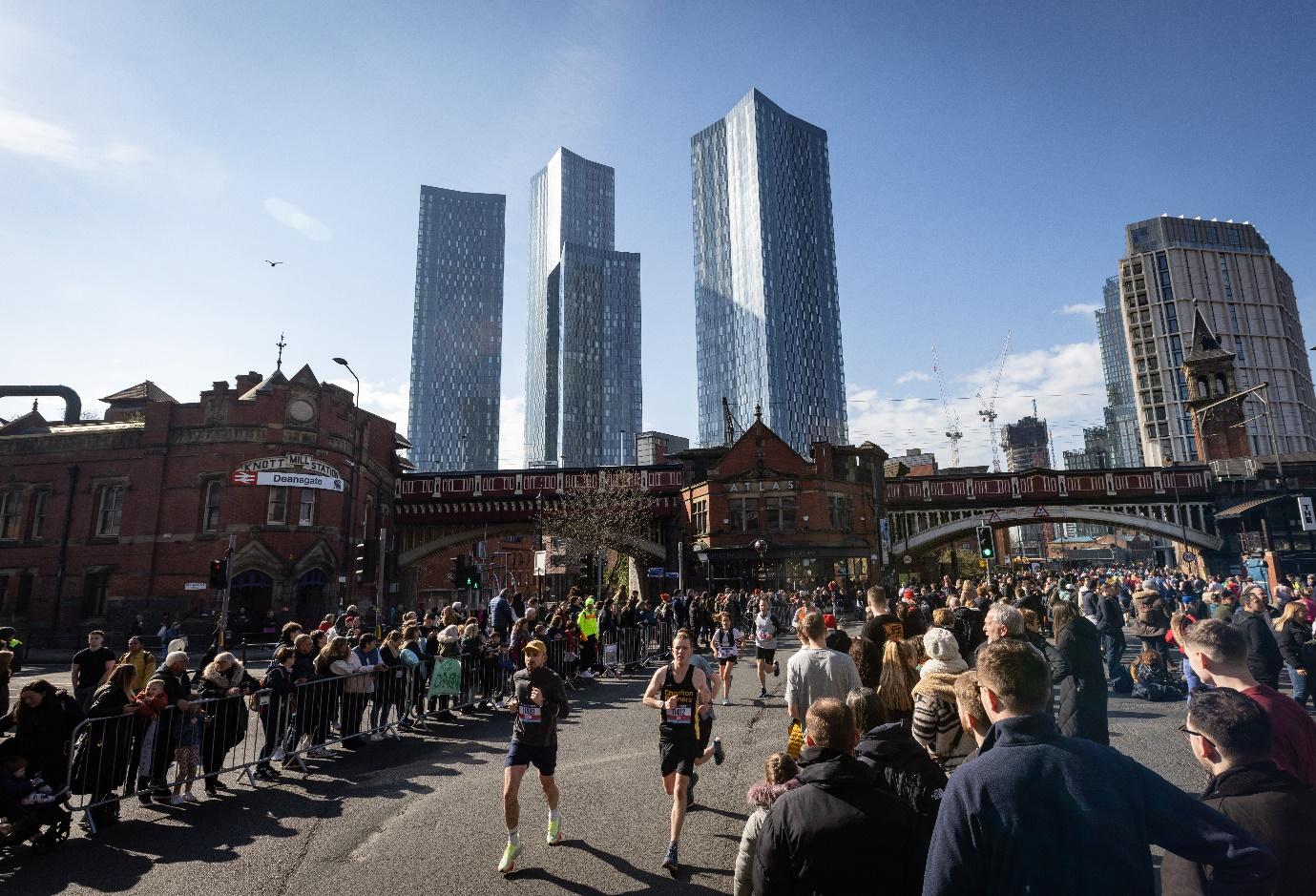 Thousands of supporters flocked to the streets of Manchester to cheer the participants as they completed the course.

Roads across Greater Manchester were closed, with the popular City Centre section remaining following positive feedback from 2021. Therme Manchester Marathon continues to commit itself to creating a positive impact on the local area and environment, contributing to the local economy, supporting businesses and giving back to the community in the form of charitable donations from the Trafford Active Fund. The economic boost is projected to surpass 2021’s total of £7.4million, with local businesses set to benefit from continued growth. 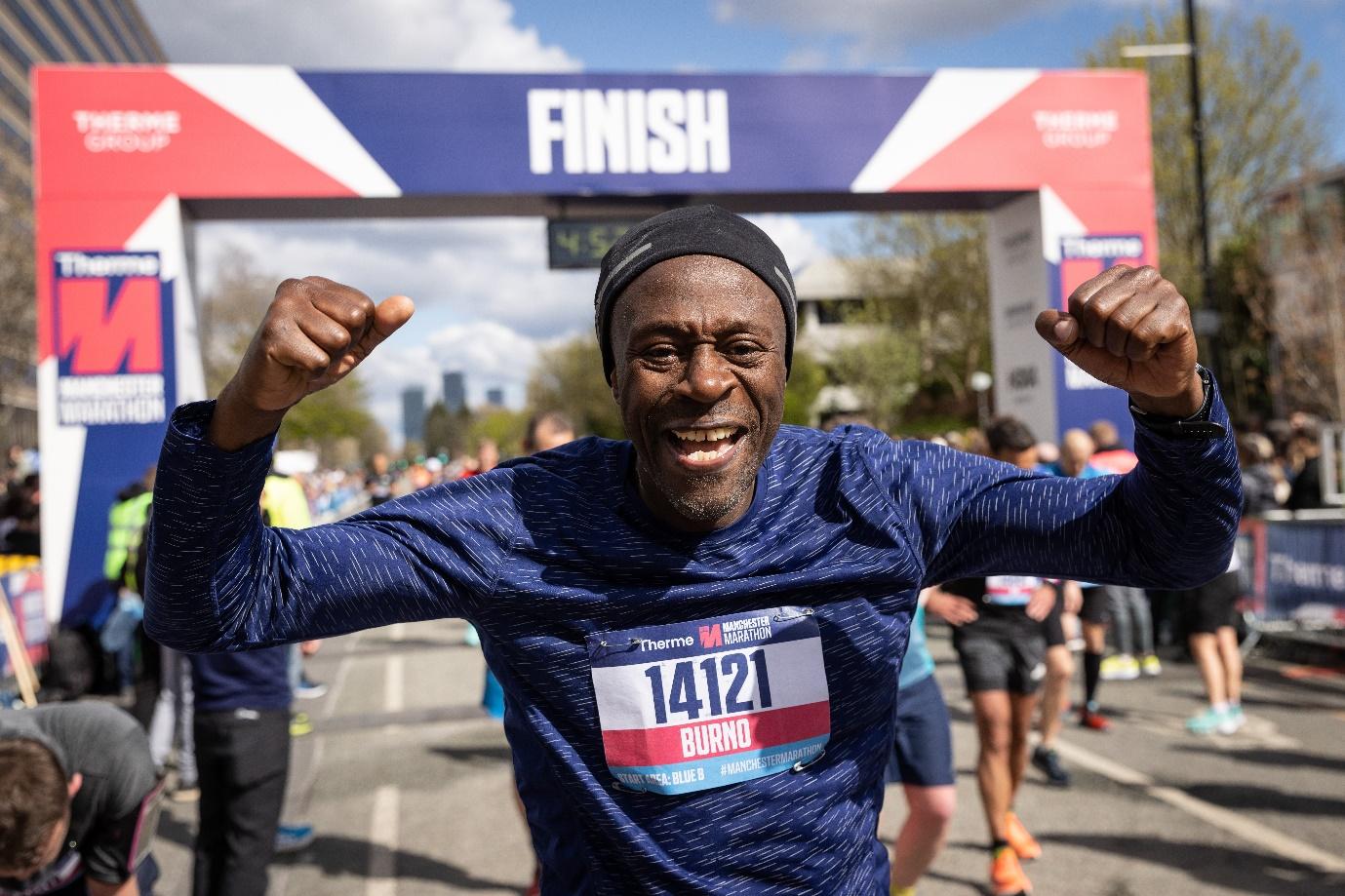 “Once again, the Therme Manchester Marathon delivered a fantastic event for all those who came, from the runners to the spectators. We saw many runners celebrate achieving PBs today, and of course we got to witness the intense battle to the finish line for the elites.

For 2022, we continued to focus on sustainability and the environmental impact of our events, and we implemented a number of measures to ensure we were as ‘green’ as we could be. This will continue to be a focus for us going into 2023. The Therme Manchester Marathon continues to sell out due to record demand every year, so we recommend securing your entry as soon as possible before we hit full capacity.”

“As title partner of the 2022 Therme Manchester Marathon, we’re proud to support an event that’s all about the joy of active lives. Looking towards the opening of Therme Manchester, the UK’s first city-based wellbeing resort, we will continue to work to bring health and wellbeing to all members of the community.” 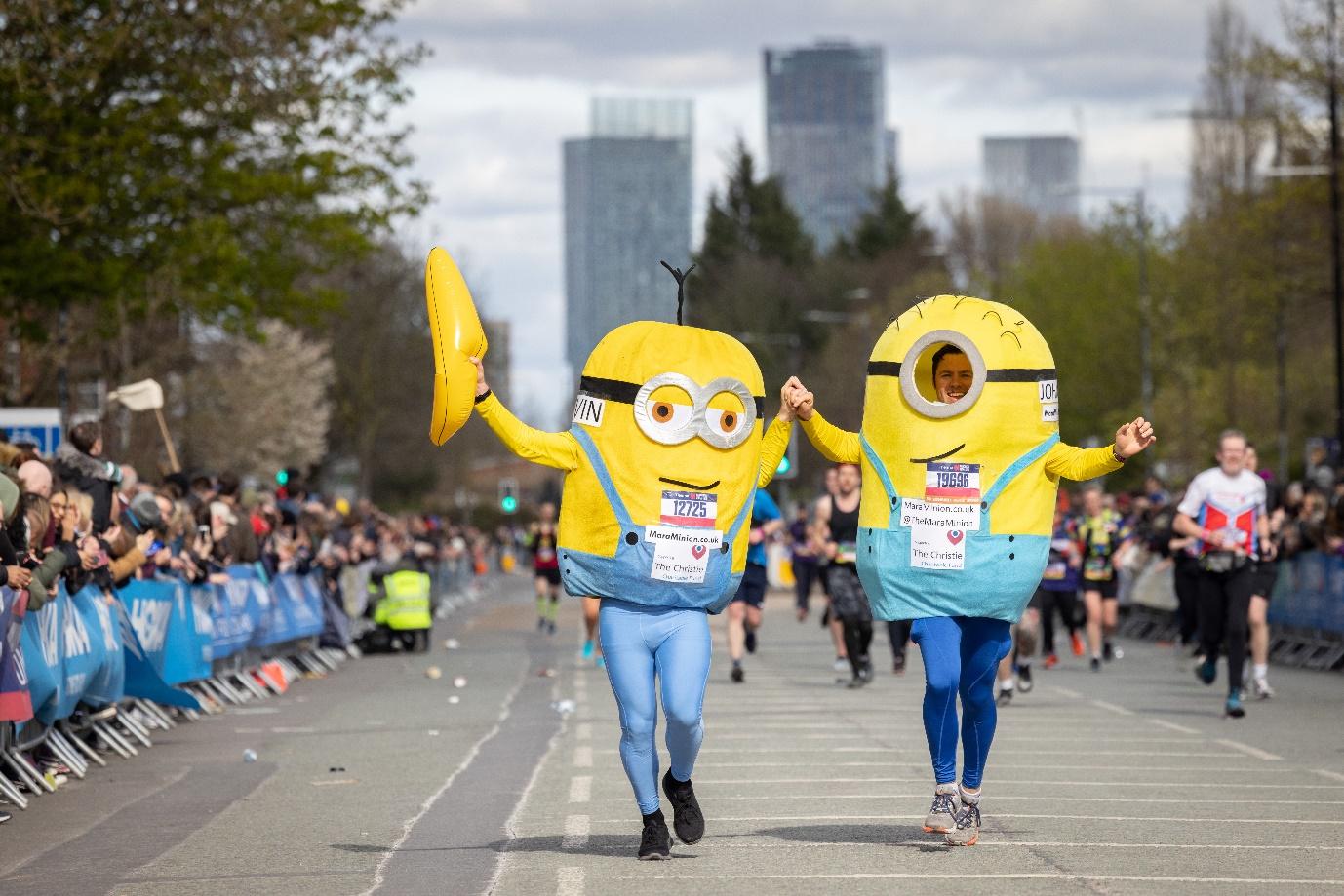 Charity runners are expected to raise over £1.5 mil for charity.

In addition to the personal achievement of crossing the finish line, many runners were also raising vital funds for Therme Manchester Marathon’s official charity partners the Alzheimer’s Society, Cancer Research UK, British Heart Foundation and Sense, in addition to other charitable causes. Over 1,800 runners were entered for charity and expect to fundraise over £2.5m.

The Therme Manchester Marathon also used their event as a platform for runners to be able to donate important funds to the Disaster Emergency Committee’s Ukraine Humanitarian Appeal. For a donation of £10 or more, runners were able to purchase a special edition race bib to be worn on their backs, showing the flag of Ukraine. Since the launch of the exclusive bib on the 4th March, over 2,500 runners purchased the bib with £31,000 raised in donations.

Team Therme had a sizable presence with over 100 Therme colleagues, stakeholders and friends participating in the full marathon or as a two- or four-part relay team. The team spirit was incredible and the team successfully raised over £1000 for Forever Manchester, a local charity that supports grass-roots projects across Greater Manchester. 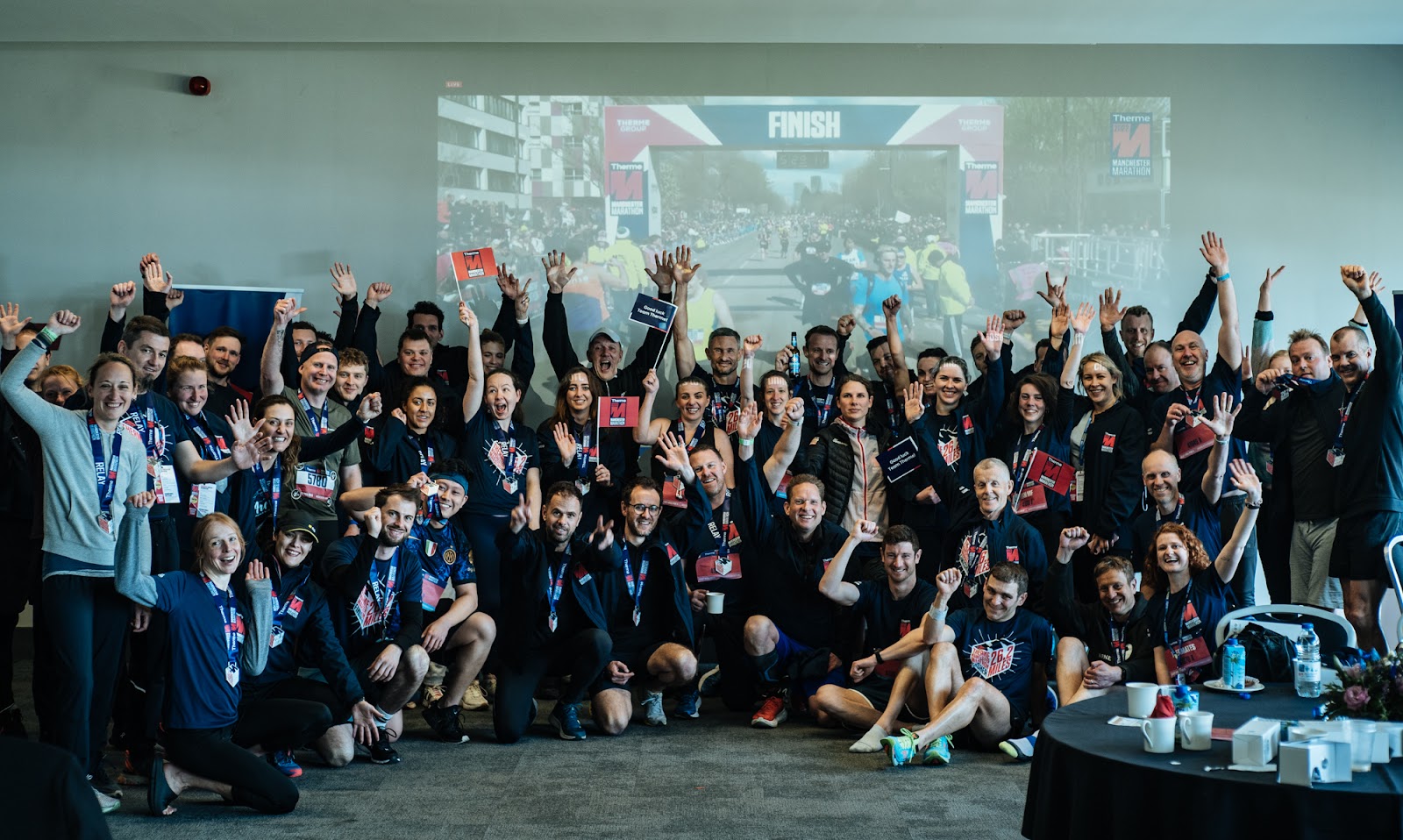 It was amazing to have so many colleagues, friends and stakeholders run the Therme Manchester Marathon as part of Team Therme.